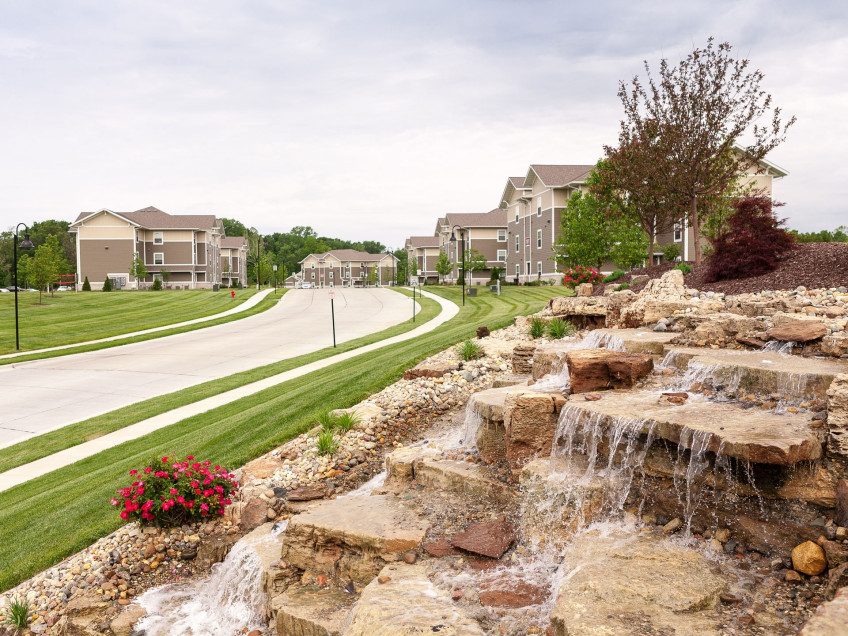 The Enclave will have 120 two- and three-bedroom units that will house as many as 352 students, beginning with the fall semester next year. The 32-acre site is on the west side of Illinois Route 157 near ESIC Drive.

Corey Wenzel, an Edwardsville accountant who heads a development group called Enclave LLC, said the Enclave will be the first private apartment development in the Edwardsville area designed specifically for university students.

Wenzel said the monthly rental cost will be in the mid-$500s. Apartments will be fully furnished, with wireless Internet, cable TV and utilities included. Each of the private bedrooms will have its own bathroom, and occupants will sign individual leases so that, if one leaves, those remaining won’t face higher costs. Amenities will include a swimming pool and a clubhouse with exercise equipment.

Wenzel calls the development “very high end.” He said the site is bordered by trees and will offer the sort of attractive seclusion suggested by the name of the complex. A Madison County Transit bike trail is nearby.

The Enclave will be about five minutes by car from the central SIUE campus and five minutes from the Edwardsville Crossing shopping center.

Wenzel and his wife are both graduates of SIUE and live in Edwardsville. They say they believe the development will benefit the university and the community.

“It’s a great university and a great town, and something like this will help them both move forward,” he said.

Wenzel said he was told SIUE had to turn away more than 300 requests for student housing this semester. He said SIUE on-campus housing offers about 3,500 beds. Some of those prospective students who could not get campus housing likely went to other schools, he said.

SIUE enrollment has increased for at least four consecutive years, with this fall’s enrollment at a record 14,235. SIUE spokesman Greg Conroy said the university had to turn away 350 requests for on-campus housing.

IMPACT Strategies of Fairview Heights will manage construction of the all-union project, and IMPACT President Mark Hinrichs said it comes at a good time for the company and the region, a time of limited commercial construction activity. He said it is estimated the project will provide as many as 80,000 man-hours of work, with peak employment of 70 to 80 workers.

“It’s a shot in the arm for our company and the local construction trades,” Hinrichs said.

A previous student housing proposal for the same site met strong resistance from residents of a nearby neighborhood in 2008, but city officials approved the project and the city prevailed when a neighborhood association sued to overturn the decision. The prospective developer, Place Properties, later decided not to pursue the project.

Hanson said that unlike the Place Properties proposal, the Enclave will follow existing city zoning regulations with only three minor variations.

Wenzel said the planned Enclave buildings will likely reduce the number of students living in other city neighborhoods.

Wenzel said the developers have ‘several attractive suitors” but no commitments for the property’s commercial frontage along Route 157.